Bluebeard's Castle:  The Wretched Fairytale offers you the chance to step inside one of the most famously dark fairytales and take your chances escaping unscathed. Through the use of a deck of playing cards, some tokens, prompt lists, and a journaling method, you will tell your own version of this gruesome tale through roleplaying your character.

➳   The Wretched and Alone Edition uses the Wretched & Alone engine with minor modifications to tell a tale of desperation, doubt, and fear. This version touches on the fairytale's themes of murder, domestic and psychological abuse, and isolation. Your chances of surviving this version of the game are slim.

The Wretched and Alone Edition highly encourages the use of a wooden block tower or one of the suggested alternatives so that the player can have a way to enter The Eleventh Hour - your last chance at rescue.

Play this version if you're interested in grim explorations, trying to beat the odds, and are in a safe headspace to enjoy the experience. The game does not intend to pursue any of these themes in a confronting way, but please assess your sensitivity to the content.

➳   The Fairytale Edition takes inspiration from the W&A engine and alters the rules to make them much more favorable to the player. The tone is somewhat less dark and more hopeful - though it still follows the general shape of the Bluebeard story. Although this edition gives you better odds than the other edition, you are not guaranteed success by any means. Fantastical, perhaps supernatural, elements are more prevalent and players are given more options for taking control of their own destiny.

Play this version if you're interested in exploring the dark fairytale with the nightlight on and safety rails up. You understand that the threat of Bluebeard is present and you may lose, but you have many ways to confront the threat and hopefully come out on top.

In order to download this solo tabletop rpg you must purchase it at or above the minimum price of $7 USD. You will get access to the following files:

Support this solo tabletop rpg at or above a special price point to receive something exclusive.

If you would like to try out the game before purchasing, feel free to take one of these. (But please only take one if you intend to play the game.)

New copies will be added in response to tips - so if there isn't a copy and you need one, try again later! [Thank you very much to all of those who have contributed to the community funds!]

I've recently gotten into journaling games, and I was particularly taken/obsessed with this one. I went out just to buy an antique key for extra immersion! I ended up spending nine solid hours writing in my journal for my character yesterday because I was so immersed in the character and setting. My hand hurts a ton today, but it was worth it!

I even made a custom spotify playlist for myself, and anyone else who might be interested in taking this on. Thank you to klawzie for making such a wonderful game! <3

Thank you so much for sharing! 🥰 I hope you've had the time to rest your hands! (And now you've got a cool key! One day I will have a collection of cool old keys.)

Do you have any particular moments/experiences your character had that you'd like to share? Absolutely no pressure, but I'd genuinely love to hear about it! (You could even email if that'd be more comfortable!)

Sure! I made her a peasant girl living on an apple orchard with her family. As the days went on, the realization of who he actually was took its toll on her; she genuinely loved him, and was completely heartbroken that it was all a lie. But she wasn't about to let her love for the person she thought he was stop her.

I set up a couple different plot threads in case I wanted to explore them later and tie things together, but the one that came in handy was the mention of Carlisle, the doddering old head butler--along with the first wife's affair with a mysterious man known only by his initial, 'C.' I 'cheated' a little bit by writing a custom ending without actually 'earning' it (I'd severely underestimated how long one Wretched game would take without the Ace of Hearts on top of the deck and needed to have the table cleared by the next day 😅) where Bluebeard came back and was about to strike down my girl, only for her to be saved by Carlisle finally taking his vengeance for his murdered lover all those years ago.

My parents are encouraging me to make it into its own story, which I'm considering. I'm also going to play more games for 'real', so there will be more wives of Bluebeard to come! :D

Oooh! The story sounds absolutely wonderful! I'm with your parents - you should definitely expand on it! I hope you have a lot of fun the next time you play too! (And I'm always down to hear about what happens!) Thank you so much for sharing! 💖

hey this looks seriously cool, I love dark fairytales! I wondered if there would be any community copies added? Thank you!

A friend pointed out that I'd somehow missed your post. Sorry about taking ~3 months to get back to you! If you send me an email at tatzelwurmtavern@gmail.com I'll send you a code in reply. :)

For anyone else who happens along after, I'll be having a sale this month (August 2022). Once that ends, I'll add as many community copies as there were sales.

I had a great time playing this game (Wretched and Alone edition)! I did it twice back to back. The first time, my tower fell over and my character subsequently died. I decided I wanted to give it another go, so I started again in the same universe with the next wife of Bluebeard whom he married after murdering my first character. I let her find the previous wife's diary at the beginning so she had more information from the get-go. After the initial tower pull, I added a special rule where I would only pull every 3rd block that I was directed to pull. This made sense to me since my second character knew more secrets and thus her mental state wouldn't be quite as volatile as my first character's. (also, she was just a more stable person in general)

That didn't end up being much of a cheat for her, as I eventually went through the entire deck of cards anyway. I got the Ace of Hearts for her very early on, but had bad dice luck so she wasn't rescued that way. Instead, she got very lucky in the Eleventh Hour and was able to escape after setting fire to the castle and running away to the nearest village. Bonus: Bluebeard also died in the fire.

I feel that this is one of the more immersive solo TTRPGs I've played and I got so into both characters' heads that the prompts were easy to write for. I chose to ignore writing about certain prompts (while still doing the tower pulls, etc) because it didn't make sense in-character for my characters to think or worry about such things, so even with the same prompts (and same husband/backstory), the diary entries for both women read very different from each other.

It was a lot of fun and I really love how beautifully the booklet is designed! I had to print out the simple version, but I flipped through the decorative PDF for a long time before playing. I documented a bit of my playthroughs on Twitter. Here's the first wife (well, 12th) and here's the second (13th in-universe).

Thank you for a harrowing but very enjoyable couple of hours!

I'm so glad you had a great time! I'm truly excited to read the Twitter feeds! Thank you so much for taking the time to play, share your experiences, (and the compliments!)

EDIT: And I would absolutely draw fanart of any of your games in return for a transcript of your play sessions. ;D (It was a jolt to realize I know your work!)

Aww! I'm working on typing up my diary entries but they definitely need a little TLC before they're readable, haha. But yeah I'd be happy to share with you once they're up.

I know how that is - I'm sitting on a lot of solo plays myself for the same reason. :) I'll look forward to it, but obviously take your time! 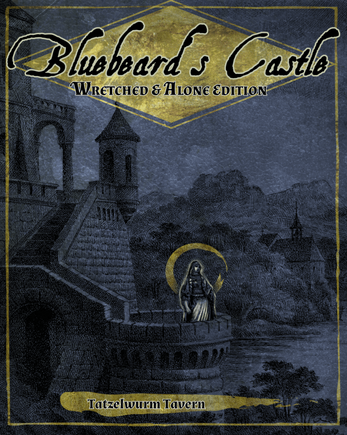 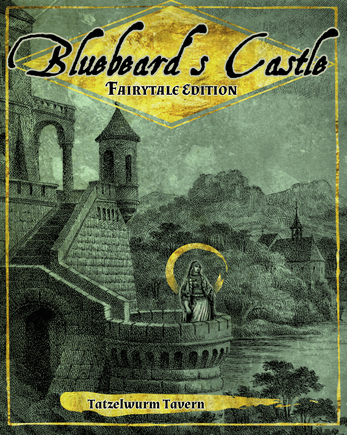 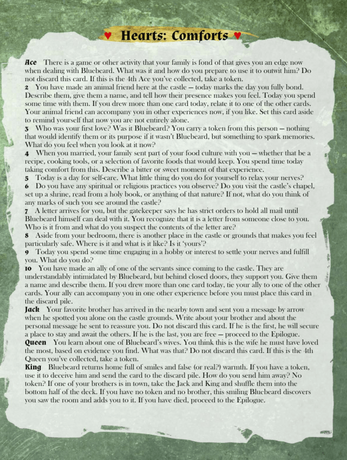